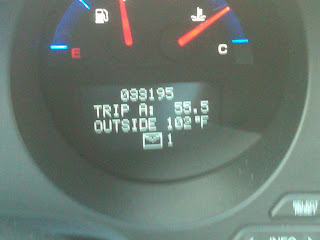 I took the picture to the right in my car on the way to meet Sergei for chicken wings the other day, shortly after leaving work. Pretty damn hot, as you can see. What I'm trying to figure out is if a significantly higher temperature (such as a temperature >100 degrees Fahrenheit) makes us more or less vulnerable to a zombie invasion?

Now, my initial thought was that with the higher temperatures, people would be sweating more, skin would be a little looser, and people would be outside more and presumably hurting themselves, thus bleeding more... but is that at all relevant to what it would take to start a zombie invasion? My research thus far has yielded surprisingly little results, and if you look at it from a pop culture perspective, it seems that weather really has no impact. For instance, "Zombieland" occurs during what appears to be either spring or summer, while "Dead Snow," if it's not obvious from its name, occurs during the winter. In both cases, there are zombies-a-plenty.

Searching for "zombie attacks more likely hot weather" doesn't really tell me anything aside from the fact that you're more likely to be killed by extremely hot weather than a terrorist, so I might have reached a bit of a stone wall when it comes to my research in this area.

Do any of you have any ideas as to whether hot weather = higher likelihood of a zombie invasion? For the moment, for the reasons I outlined at the top of the post, I'm sticking with my original hypothesis that hot weather DOES, in fact, make it easier for the zombies to take over. But I'm open to changing my mind if someone can find some good reasons as to why.
Posted by Ash Williams at 8:47 PM