Hornady Z-Max Zombie Defense ammo has been out for a while now and let me tell you, everyone should have some. I picked up some .223 and some .45 ACP shortly after it came out. Recently things got better, with Hornady selling the bullets in bulk (500 count) packs.

This couldn't come at a better time. I have been developing an ideal .300 WSM round for longer range zombie head shots. Unfortunately they don't offer a .30 cal bullet at this time but they do have a bullet that will work very well in my long range .223 AR-15 with it's 10x scope and 24" stainless match barrel. Zombies don't stand a chance if they come in to my neighborhood.
Posted by Sergei Mosin at 3:56 PM 4 comments: 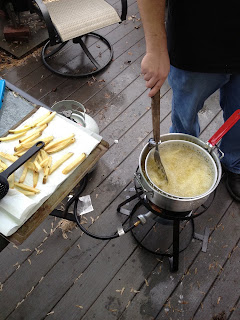 So, as you can see from the totally awesome picture on the right, Sergei and I broke out the deep fryer this weekend. From what I can recall, we fried the following goodies: fries, chips, tortillas, hot dogs, oreos, twinkies, bananas, mac n cheese, pickles, cinnamon rolls... and probably some other things that I'm forgetting about at the moment.
The point of this (what I realize is a very short) post is this, though -- do you guys think that if, given the choice, zombies would prefer deep fried human flesh to regular old human flesh? My suspicion is that they would DEFINITELY prefer deep fried human flesh, but that's just based on my observation that almost everything is better fried. And, since they're already dead, they wouldn't have to worry about the detrimental effects to your health of consuming too many fried foods! At least, I don't think they would. Do zombies need to worry about heart attacks? They bleed when you shoot them, based on my observations, so that makes me think the heart must be pumping blood. But maybe I'm wrong. So many unknowns when it comes to zombies. :(
And finally, there's the fact that the unfortunate little boogers don't actually have the mental capacity to run a deep fryer (although I can promise you that, speaking from experience, it doesn't take much). So maybe we'll never know whether zombies would prefer deep fried human flesh to regular ole human flesh. Which is unfortunate. Even more unfortunate (at least for them), however, is that those zombies have no idea what they're missing!
Anyhow. The holidays are over. It's a brand new year. Things are looking up (I'm told). But that doesn't mean you should be letting your guard down. Keep your eyes open and your ears to the ground. Look for the warning sings. The zombies are coming, people.
-AW
Posted by Ash Williams at 9:40 PM No comments: