e.coli in europe - the beginning of the apocalypse? 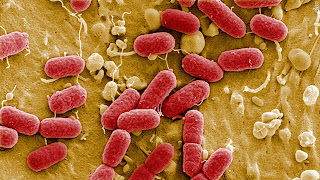 So, unless you've been living under a rock over the past days, you're aware that the folks over in Europe are having a serious problem with E. Coli. Conventional wisdom holds that the zombie apocalypse will begin with the introduction of a virus that infects a small group who turn over a period of anywhere from a few hours to a couple of days. So, the real question is, will it be an E. Coli outbreak that gets things started? At least initially it seemed to be that the problem with E. Coli was contained in Europe, which means that in a matter of days, France will undoubtedly be surrending to Germany. The kicker, though, is that I heard recently that there was a case of E. Coli in my hometown in Tennessee -- if that's the case, it might already be on US shores!

So, if the virus has made it to US shores, it's only a matter of time before Patient Zero bites somebody, which infects them. And then they bite someone else, and infect them. Lather, rinse repeat, until such time as police and military barricades are being overrun and there are crashed helicopters in the middle of the street in residential neighborhoods.

Lock and load, people. The zombies are coming.
Posted by Ash Williams at 10:31 AM

Email ThisBlogThis!Share to TwitterShare to FacebookShare to Pinterest
Labels: apocalypse